The 800 km (500 mile) wide Ross Ice Shelf is the largest in the Antarctic, a region where the effects of climate change are becoming increasingly apparent. Because ice shelves are in contact with the surrounding ocean, they are especially sensitive to changing environmental conditions. A significant portion of the large mass of land ice in the West Antarctic Ice Sheet (WAIS) is buttressed by the Ross Ice Shelf. If the restraint on glacial flow provided by Ross Ice Shelf buttressing is removed, i.e. the ice shelf collapses, WAIS ice will flow much faster to the sea, accelerating sea level rise.

Ocean waves impacting the front of the Ross Ice Shelf (RIS) send vibrations throughout the ice shelf, much like the beating of a heart sends a detectable pulse throughout the body. As with a pulse, these vibrations can be used to help assess the health -- the stability and structural integrity -- of the ice shelf. The speed the vibrations from direct wave impacts and fracturing (icequakes) travel through the ice shelf much faster than the speed of the ocean swell and infragravity waves that generate them. The vibrations are expected to travel more slowly where the ice is broken, fractured, or crevassed. Some of the wave energy couples with the ice shelf, producing "flexural gravity waves" (Bromirski et al., 2015, 2017) that travel at the speed of the ocean waves producing them, that depends on the thickness and strength of the ice, and the depth of the water below the floating ice shelf. An array of broadband seismometers was deployed on the ice shelf surface during November 2014 to measure the amplitude and speed of these vibrations (and other propagation characteristics) along multiple paths across the Ross Ice Shelf. The data are anticipated to enable us to identify zones and regions of weakness that will assist in determining the spatial variability of ice shelf strength. 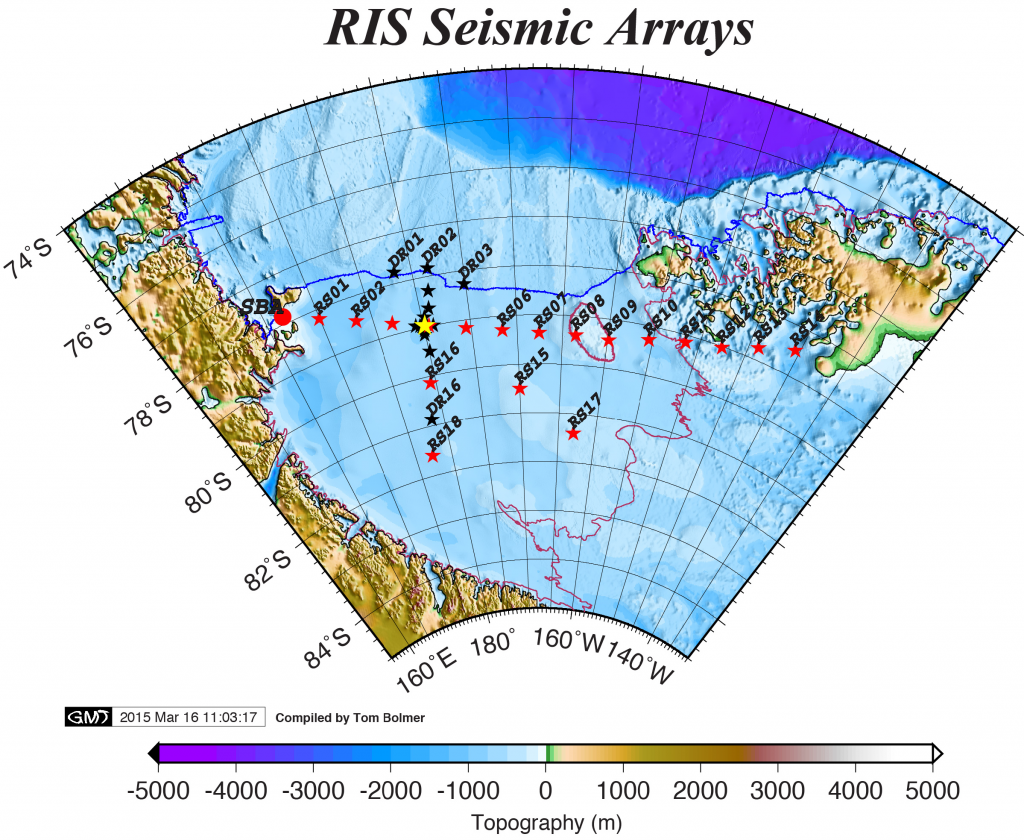 Map of the Ross Ice Shelf showing bathymetric relief of the seafloor (blue and white), topography above sea level (green and brown), the ~2005 ice front location (blue line) and the grounding line of shelf (magenta line). The red and black stars are RIS and DRIS locations respectively. SBA is a permanent broadband (GSN )seismic stations on land. The DRIS locations at the front of the shelf appear to be seaward of the ice edge because the edge has moved seaward by ~10km since ~2005. These sites are actually ~2km landward of the present day front. The dense array of stations surrounding Yesterday Camp (yellow star) is shown in more detail in figures below.

The 16-station broadband seismic array was deployed on the Ross Ice Shelf (RIS) during November 2014 to measure the response of the RIS to impacts from ocean swell and infragravity (IG) waves. IG waves and/or swell could provide the required external forcing needed to extend existing fractures or trigger sudden ice shelf collapse. The array will measure the spatial and seasonal variability of the wave-shelf interaction, including both the generation of elastic stress waves and the flexing of the ice shelf. The deployment will provide the first spatially comprehensive data on the response of ice shelves to IG waves, including the mechanical and elastic response of ice shelves to gravity wave forcing, both essential to understanding and modeling ice shelf evolution.

The DRRIS ice-shelf deployment will consist of sixteen stations equipped with broadband seismometers and barometers, including: 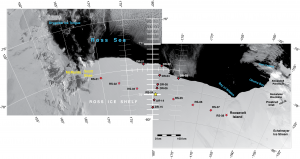 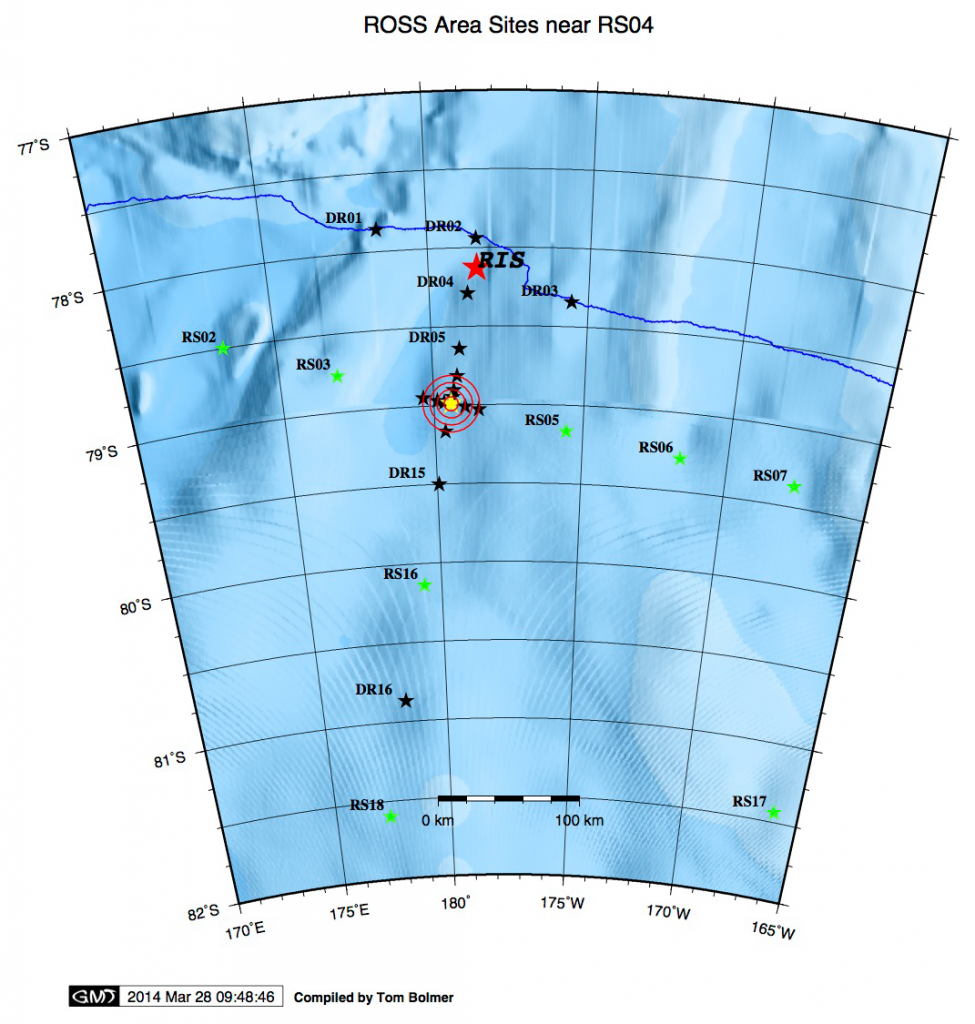 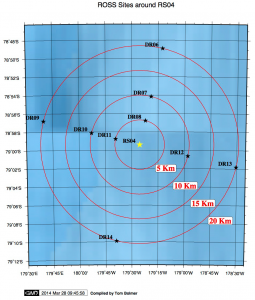 Array processing will be used to identify dominant source locations along the front, and propagation speeds across the combined array.

Compliance analyses will investigate changes in flexural properties away from the front towards the grounding line.

Mechanical modeling will complement the TDFD investigations, both using seismometer observations to understand the response of the RIS to gravity wave interactions.