Of all the glaciological components comprising the Antarctic Ice Sheet, ice shelves are the most vulnerable to climate change. This is because, as the most seaward extension of a glaciological system, ice shelves are in contact with both the atmosphere above and the underlying ocean. Consequently, ice shelves are in continual adjustment to dynamic forcing from multiple sources: the advancing glacial ice, the bedrock to which they are attached at the continent’s edge, the atmosphere (temperature, pressure, wind), as well as the ocean conditions below (temperature, currents, storms, and waves). Changes in any of these can alter ice shelf extent, flow velocity, thickness, and other parameters as the shelf responds to new forcing. 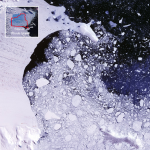 Climate change affects ice shelves through warming of the atmosphere causing increased surface melting, and increasing ocean temperatures that melt ice shelves from below. The resulting ice shelf thinning (from above and below) weakens ice shelves, making them more easily fractured. Progressive thinning and associated weakening can result in ice shelf collapse, as observed at the Larsen Ice Shelf over a period of months in 2002.

The collapse of ice shelves doesn’t affect sea level directly, but they have an important function in buttressing or restraining the flow of glacial ice into the sea, which does increase sea level. (Glaciers are large flowing masses of ice on land. When they move from land into the ocean, that mass adds to the ocean volume. The melting of ice that is floating on the ocean — seasonal sea ice, icebergs, or ice shelves – does not cause sea level to rise. This is the same as the water level rising in a glass when ice cubes are added, with no further rise when they melt.) So while melting or collapse of an ice shelf does not increase sea level, the brake on glacial ice flow from land to the sea is removed. As a result, the speed of glacial ice entering the ocean increases, causing an acceleration in sea level rise. Rising sea levels are a concern for coastal communities globally, where storm surges and wave impacts are superimposed on regional mean sea levels, with anticipated increases in storm-forced sea levels expected to severely impact the California coast (Cayan et al. 2008) and states along the U.S. eastern seaboard. Rising sea level around Antarctica also has the potential to destabilize the region where floating ice shelves contact the earth, the grounding zones, accelerating ice flow to the sea.

The Dynamic Response of the Ross Ice Shelf project aims to further understand processes that impact ice shelves through the use of a novel diagnostic tool: the year-round deployment of a broad-scale seismometer array on the ice shelf to continuously record vibrations caused by the impact of ocean waves. Analysis of the response — the “pulse” of the ice shelf — will provide information on wave-induced stresses as well as a baseline “state of heath” measurement of ice shelf integrity. 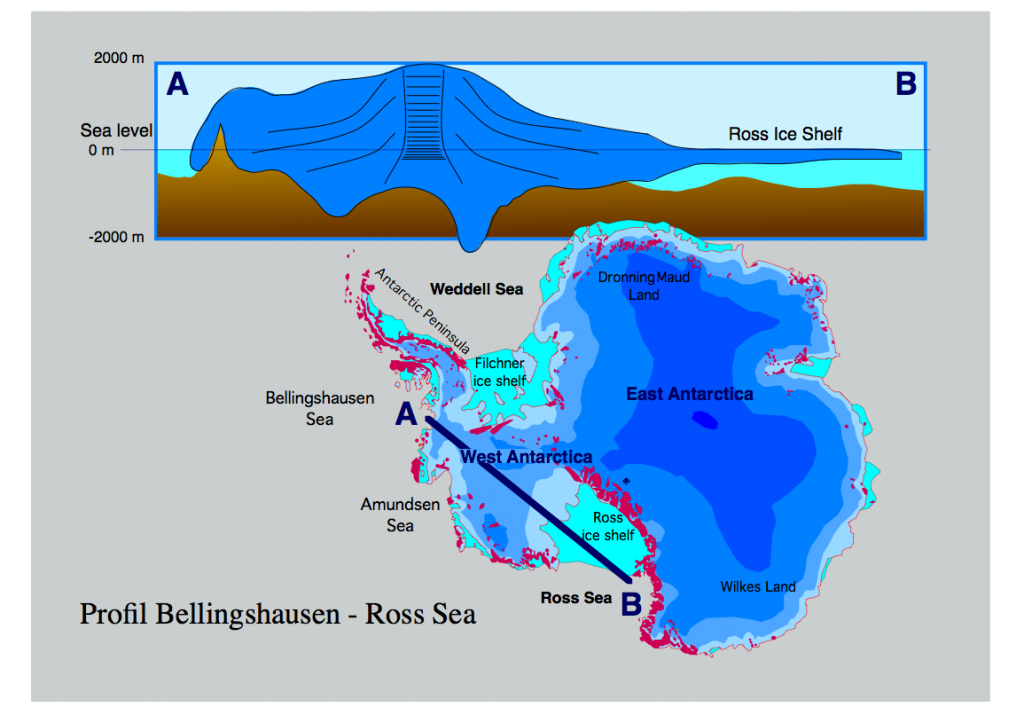 Profile through the Antarctic ice sheet (A) Bellingshausen Sea – West Antarctic ice sheet – Ross ice shelf – Ross Sea (B). The profile shows that much of the West Antarctic ice sheet is grounded below sea level which makes it sensitive to sea level rise. If the contact of the ice to the bottom rocks is lost seaward of the grounding line, the ice sheet becomes significantly thinner (some 100 m), forming a shelf ice. Lines in profile are lines of similar age; annual layers in the center are thinning from top to bottom. Turquoise areas: ice shelf, red areas: not ice covered (2.8 % of total area). Blue shaded areas increment by 1000 m in thickness. [Hannes Grobe (2006), Alfred Wegener Institute for Polar and Marine Research, Bremerhaven, Germany. (Creative Commons CC-BY-SA-2.5)