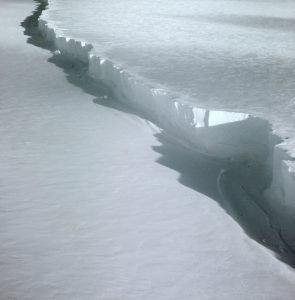 On Antarctica, a massive continental ice sheet covers most of the land area and flows outward toward the coasts through numerous glaciers. Ice shelves are formed where flow rate is high and glaciers spill into somewhat protected waters, forming a long-lasting covering over the water below that can be several hundred meters thick. The Ross Ice Shelf is the largest of these in Antarctica. Unlike seasonal sea ice, ice shelves persist year-round and are significantly thicker, as seen in this photograph where the Ross Ice Shelf meets the seasonally ice-covered Ross Sea.

Even though the speed of ice flow on the Ross Ice Shelf is from 300-1000 meters per year, the mass of the floating ice shelf serves to buttress or restrain the flow of outlet glacier ice from land to the sea, keeping sea level rise in check. In recent years however, some Antarctic ice shelves have undergone rapid collapse, initiating large acceleration of glaciers into the ocean (Rignot et al., 2004; Scambos et al., 2004). 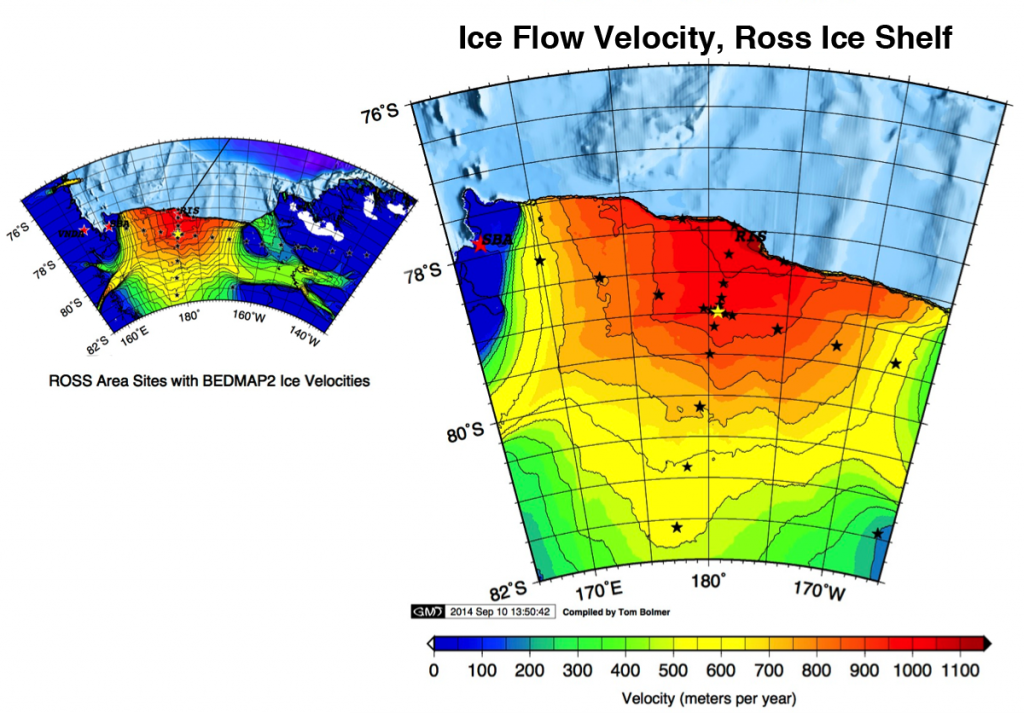 The DRRIS seismometer array orthogonal to the ice front tracks a zone of high velocity flow. It is anticipated that thinner, faster portions of the RIS nearer the front should be less rigid and respond more strongly to flexural stresses induced by IG waves propagating in the water cavity below, with the amplitude of the response decreasing southward as the ice shelf thickens. These measurements will provide baseline measurements of the variability of RIS rigidity away from the front.

On the Antarctic Peninsula, a portion of the Larsen Ice Shelf larger than Rhode Island experienced such a collapse over the course of about 2 months in 2002. 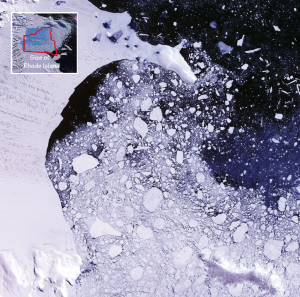 Collapse of an ice shelf can occur when adjustment to environmental changes results in the thinning and weakening of the ice shelf, causing formation of large crevasses that increase the risk of the shelf breaking up into fragments. Bending stress from both the weight of the ice near the shelf front and flecture caused by wave and tide interactions, combined with hydrofractures from surface ice melt, are thought to contribute to this process. What forcing ultimately triggers a collapse event has not been determined, although ocean waves (swell and infragravity waves) are potential triggers.