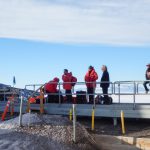 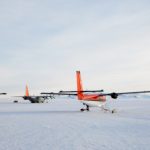 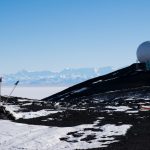 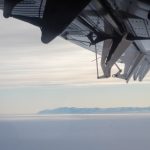 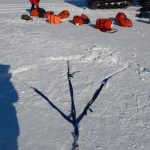 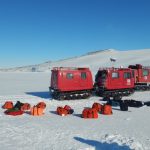 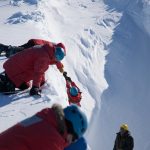 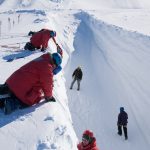 Our training is starting to get more serious. In addition to packing smaller boxes in big boxes or even unboxing boxes for the cargo stream, we also spend our preparatory time here at McMurdo in field training courses for all kinds of hazards we may face. One of the more enjoyable trainings so far has been the Crevasse Training, which prepared us for one of the most critical dangers traveling on ice shelves. Even though it is very unlikely that we’d encounter crevasses in the areas of the Ross Ice Shelf we’ll be visiting (there haven’t been any within the last 2 years), it’s essential that we’re prepared for any situation.
Crevasses are ridges in the ice that occur due to bending forces. They can be anywhere from a few feet to several tens of meters deep. Since the Ross Ice Shelf is about 400 meters thick, very long and deep crevasses can easily occur. Winds can blow them full with snow or produce overhangs, making them difficult to spot when traveling on the shelf.
The occurrence of crevasses is poorly understood and, in fact, one aim of this project is to gain a better understanding of their occurrence in floating planer ice shelves. The shelf floats on the ocean and has to adjust to changes of the sea surface height following the principle of Archimedes. Further, the thicker the ice the more inertia you need to induce measurable motion. Since the Ross Ice Shelf is grounded to the Antarctic continent in the South, the buoyancy force from sea surface height variations (due to storms, tides, and other processes) induces stress leading to bending in the ice. Just like bending a piece of wood, if you keep bending for long enough and with sufficient force, cracks will begin to form. In an ice shelf, the permanent small bending forces from ocean tides and waves may be enough to produce ridges that propagate and extend in time.
The first (and indoor) part of the crevasse training included climbing up a short section of rope (with Prusik hitches) that was being constantly lowered, as Sisyphus would have had experienced it. We also learned how to use mechanical advantage to establish 3:1 and 6:1 (two people) pulleys to drag grad students along the floor. Tying knots and organizing rope inside a heated building is one thing, but doing it outside on day two of our training in full extreme cold weather (ECW) gear was another story. We headed outside to the McMurdo Ice Shelf just beyond Scott Base on Tuesday to practice anchor building and crevasse rescues in a ~25ft “simulated” crevasse created by our USAP mountaineer guides. Although the day of practice outside was good fun, we hope we’ll never be required to use the crevasse rescue skills we’ve learned. Stay tuned for our next post!